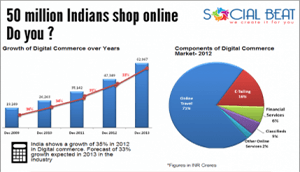 The digital commerce market in India was valued at INR 47,349 Crores in 2012 and is expected to grow by 33 percent. It is undoubtedly the fastest growing online market in the last 12 months when compared with the other BRIC Countries. According to the latest Digital Commerce Report, by the Internet and Mobile Association of India (IAMAI) and IMRB International.

The report finds that while Online Travel, which includes booking rail, air, bus tickets, hotel accommodations and tour packages comprised a majority 71 percent of the whole Digital-Commerce market in 2012,E-Tailing, which includes purchases of various consumer products/services such as electronics, apparels, footwear, jewellery, home & kitchen appliances, consumer durables, furnishings, constituted only 16 percent of the overall share. This is the segment which all ecommerce companies including Amazon India are trying to target.

With more and more people planning their payments and Financial services online, market was valued at INR 2,886 Crores in 2012 and is expected to grow by 25 percent and reach to INR 3,607 Crores by the end of year 2013. According to the report, Classifieds market has seen a significant growth and has reached INR 2,354 Crores in 2012. Classifieds as a category has grown with a CAGR of 45 percent growth from 2009 and is expected to grow by another 30 percent to INR 3,061 Crores by 2013.

Online travel industry in India has on an average grown by 32 percent from INR 14,953 Crores in 2009 to INR 34,544 Crores in 2012 and is estimated to grow by another 30 percent and be valued at INR 44,907 Crores by the end of December 2013. The travel industry also sees interesting fact about the average cart value of goods purchased ranging from 17$ in IRCTC to about 204$ and 166$ in Make my trip and Yatra.com respectively.

The E-Tailing category has grown from INR 1,550 Crores in the year 2009 to INR 6,454 Crores in year 2012. With the entry of the world’s largest online retailer, Amazon through the launch of its online marketplace in India, Amazon.in and hundreds of start ups emerging, this category is estimated to grow by 55 percent and cross INR 10,000 crores by the end of 2013 December.

India represents Amazon’s tenth marketplace where buyers can browse through a catalogue of 7 million books and 12,000 movies titles initially. The company is planning to expand its product footprint to cameras, mobiles and other electronics devices.

With the Digital commerce market having so much to offer to the country, one could only see internet and Ecommerce reaching not just the metropolitans and the major cities in India but also hitting the Indian Villages soon. Of course, it comes with its humongous set of challenges forcing even Flipkart to follow a marketplace (no-inventory) model. For now, its time to watch the big players battle it out in the ecommerce market 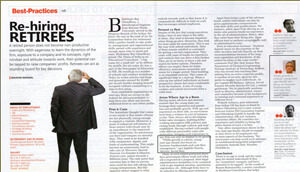 Our advisor, Jagdish Chawla was recently featured in the Small Medium Entrepreneur Magazine. You can find the full interview below and can read the article on Entrepreneur India here.

Startups are usually started by young enterprising individuals. Having senior advisors and mentors will ensure that the young team can leverage their experience and pursue faster and profitable growth.

Since start ups generally face a talent crunch, do you think retired individuals with their age and experience can help in serving the firm on their advisory board or provide valuable mentorship/training?

Absolutely. Experienced professionals have seen a lot of business cycles and have worked with people with different personality types and motivation. Bringing such experience to a startup can only be helpful.

Do you think it is viable to encourage such post retirement opportunities, keeping in mind that India is mushrooming with start ups?

A platform to connect Advisors/Mentors with such young startups would be very useful. There are angel investors and startup communities, but none for retirees.

Do you think there is any downside towards hiring ex-servicemen?

None I can think of. Its a win-win situation for both.

Research shows that there is a wide mismatch, a “generation gap” between the brains behind a start up firm and an ex-serviceman? Have you faced any such notable hindrances? If yes, have you to managed to overcome them and still be an active member of the firm?

Opportunities today are much higher than say 20 years ago. This has meant that youngsters are a lot more ambitious. While growth is critical, young startups should also focus on business fundamentals and cash flow management.

In what measure have you provided growth opportunities to the start up firm and helped it in its foundation days?

End of the day its the founding team which does all the work. As advisors, we can provide a good sounding board for key decisions 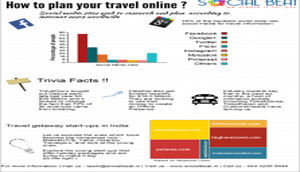 When we were trying to understand the online travel industry, we struck across an interesting fact that 40% of the travellers worldwide who use social media sites for travel information (Source: Ticket Goose).

Below is the breakup of the % of respondents that use social media sites to research and plan their trips (as of January 2013:

While that is global data, when we explored a little further to see the data from a India (in specific Chennai) perspective, this is what we found from Ticket Goose:

Interestingly there are many online travel startups in specific niche’s which are trying to enter the market. For instance, there have been a number of startups in the online bus travel space, like Ticket Goose, Ticket Karan and Travel Yaari while even established players like Makemytrip, Yatra and Ezeego1 are entering this space. Some industry sources also expect Cleartrip to also enter into online bus bookings.

Cleartrip recently launched Rail Search as online travel portals look beyond airlines as additional source of revenue. Cleartrip expects non airline revenues to go up to 20% this year. Even Make My Trip launched their “Holiday Plus” to create more engaging holiday packages rater than just air tickets and hotels.

We hope you enjoy exploring these travel planning portals. We look forward to receiving your feedback on the post and infographic 🙂