The meeting of Sergey Brin and Larry Page in 1995 at Stanford has to be the most historical rendezvous ever in the online world. Technically, the duo has been in business together since 1996 and that makes it 17 years. But then, Google filed its incorporation only in 1998 and they celebrate 15 years today. From being an academic research project (Back Rub) to literally running a monopoly in the internet domain, it has phenomenally come a long way.

In perspective, we explored few fascinating facts about Google in terms of revenue. Google’s revenue in 2012 was roughly US $ 50 billion and it’s ahead of the GDP of 89 individual countries in the world in terms of PPP (Purchasing Power Parity). And also, Google earns 2.7 % of India’s GDP (nominal).

Evolution of Google’s search page from 1998 to 2013: In the RHS of the image, you could see the empty space without any information in 1998 for the keyword “google.”

This is how a search page in 2013 looks when you type the same keyword “google” – A revolutionary change has happened from auto complete, universal search, instant search, knowledge graph to finally including intelligence features in 2013.

Google’s first doodle for its birthday came in 2002. There’s an interesting fact about when Google has been celebrating its birthdays since 2002.

Do you guys observe a pattern here? We’re not sure if Google uses a specific algorithm to celebrate its birthday every year 🙂 Since Google has finally zeroed in on September 27th as its birthday for the past 8 years, we hope it continues in the future too. Happy Birthday Google 🙂 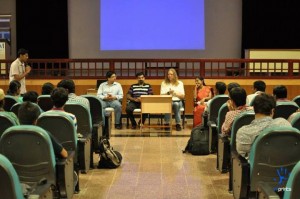 The day started with the long journey to SRM, situated in the outskirts of Chennai. “Aaruush” is SRM’s techno-management fest (but they do have a pro show; mind you) and ‘Unconference’ is the event for which Vikas Chawla was invited to be one of the panelists. Down to SRM auditorium. We’re warmly welcomed by the hospitality team and met one of the other panelists, Raghav Srinivas, an interesting persona with interests ranging from neural science to social media to philosophy. And in next few minutes, we’re duly joined by the other panelists. One of them is a lawyer in High Court, Aruna Ganesh, who holds the credit for handling Chennai’s first cyber crime case. And the other one is a fascinating person, J Walt, a professional who performs on virtual reality video concerts (also, he is the one doing the pro show). And, our own Vikas Chawla, a multi-faceted personality who is experienced in Marketing, Sales, HR and currently the Co-Founder of Social Beat. That’s all about the diversified panelists.

The screen goes up “UNCONFERENCE : Social Media – SOS or LOL” (You guys can always google SOS and find out what it is, I did that too). And the whole conference was moderated by a student called Arvind, who was articulate enough to put forth what the audience thought and kept the momentum going. For most of the time, the discussion was confined only to Facebook and other social media platforms were not exploited at all, let alone twitter.

The debate started off with the clichéd “How many of you check out Facebook the moment you wake up and before you go to bed” question, to which except the wall (not the Facebook wall) in the auditorium, everyone raised their hands. Let me quote few excerpts and anecdotes shared thereafter. Vikas said “Facebook says the most visited page of a user is their own profile.” Raghav added the brain connection to this, “The impact of pre-frontal cortex plays a huge role in our subconscious thinking.” Then, the discussion gradually moved on to the grey area – the legalities governing internet in India- which was neatly elucidated by Aruna Ganesh. Most of the audience was not aware of the IT Act 66A and the legal implications. Thanks to my Twitter TL during the most happening days, it didn’t seem Greek and Roman to me at least. Aruna spoke in length various issues concerning the netizens and quoted few brilliant examples. For instance, she told “A person from Oman filed a complaint with the Chennai police stating that he was guaranteed employment by a party here. He submitted the e-mails sent to him by the employer. The cyber crime branch tracked the IP address to the complainant’s personal laptop. Then came the shocking revelation that the complainee was found to be none other than his own son.” J.Walt quipped on this bizarre act as “What a rotten kid! How messed up this family is.” He pitched in good amount of humor time and again that left us all in splits.

The crux of the discussion and also the crucial takeaway was the IT Act 66A. Our ignorance on the law of the land governing social media was a grim reminder to all. Also, there was an interesting student in the audience who actually echoed everyone’s feelings by saying “I post a really good and sensible status – 10 likes. And my girl shares it – 100 likes.” And he also questioned why people are not taking responsibilities. Vikas made a quick reply saying “Responsibility has to come from within. You should be the change you wish to see in the world.”

Unconference finally came to an end with various thoughts and conclusions consolidated and narrated perfectly by Arvind. So, who had the last laugh? Social Media 🙂 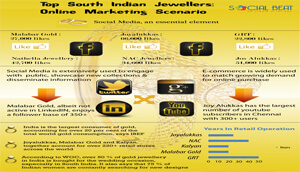 South India has been the biggest region for gold consumption in the country for many years now. Purchasing gold continues to be a tradition and is considered as the safest investment for people. Chennai, Coimbatore, Kochi and Thrissur together account for nearly 20 % of the annual gold demand. Jewellers are utilizing this opportunity and expanding their foothold in South by opening more showrooms  and  leveraging their social media presence to engage with the consumers.

At the moment only Facebook is significantly used to promote new products, to carry out festival contests and to interact with the consumers. Kalyan Jewellers – 209,000 likes, Joyalukkas – 66,000 likes and Jos Alukkas – 51,000 likes are among the largest contributors on Facebook. Even the big players are yet to explore other networking tools like Twitter, Pinterest, Instagram, Youtube, Google Plus and LinkedIN. Gehna with 30+ fans and Malabar Gold with 350+ followers are one of the few jewellers using Google Plus and LinkedIN to build a strong network of customers. Joyalukkas, GRT and Jos Alukkas upload videos (though, not frequently) in their YouTube channels to cater to their 700+ subscribers.

E-Commerce is another area that is picking up with jewelry houses and increasingly we see many showcasing and selling online. Online presence is supporting offline purchasing in a big way , with social media and digital marketing  being the greater influencers on customers.